The last Christmas Break of my educational career has started and it has come at the perfect time. I have  been looking forward to having this time to myself. I need this time to focus on how I want to move forward in the new year and become stronger. I feel like everyday is an opportunity for me to learn how  to become better and more wholesome as a person, and sequentially and actor. I want to move on from the things that hold me back and just leap into life. I have a tenancy to dwell on things that are in the past or are beyond my control, but in the last few weeks I have experienced a surge of freedom. This surge has helped me to have a more positive and carefree outlook on life and I am loving the feeling.

I had my term evaluation with Alisa Palmer on Friday and we talked about a lot of things. Both of the directors I worked with this term (Ravi Jain & Tadeusz Bradecki) had some critical things to point out in me. Although I was initially confused by what they had said about me as an actor, Alisa was able to translate it and help me to understand how I can move forward with their feedback in mind. We came to the conclusion that I am a performer, first and for most. There is a significant difference between a performer and an actor, it is the actor that I am struggling to find. I know that the combination of both performer and actor is ideal, and is what I want to achieve more than anything.

I have always known and been most alive and explorative WITH an audience. In the rehearsal process I tend to do one of two things: I bring it in the reading and throw out all of my offers so that after weeks of rehearsal things become bland and static. Or I limit myself by judging myself before I let the work happen. Both of these things are detrimental to the process. The only aspect that ends up saving me is that I come alive in front of an audience, which is the nature of a performer. This is my talent. But I am here to learn how to be an actor, my performance abilities have and always will be with me.

Alisa suggested to me that I work with myself to go deeper in the work, to really let it affect me to open myself up to the process and avoid judgement. All things I am aware of but not sure how to do. So, my challenge for next term is to focus on cracking myself open in the rehearsal room and building myself back up in time for performance. I know that in order for me to go deeper in the work and in myself I have to give up my judgement and perceived judgement of others. This is something I have been struggling with since first year. It psychs me out so much. I mess up lines and over analyze situations to the point where I become catatonic. Self doubt and frustration is my kryptonite. When I get to those points I creatively stop and there is nothing that will push me out of that state except for time and re-evaluation, and in a short rehearsal period I don't have those luxuries.

I know that I can sometimes come off as harsh and self deprecating but that is not my intention. These posts are for me to create a marker for myself, a period in time to be accountable to. If I have written how I can progress it makes me that much more motivated to change. The more diligent I can be with myself about progression the better I can become.

To go back to my point about actor vs performer and the combination of the two; I want to clarify that I have felt truly in the work as an actor many times at the school.  And during those moments I wasn't judging myself or self conscious, I was just living with the written text and the emotions in front of me. It was extremely liberating and cemented the idea that I have the ability to be as good an actor as I am a performer. In the coming months I just want to feel these moments more frequently and gain access on the regular to this compartment. I need regular practice, and I think this can relate to what I said a few posts back about Colm Feore; I need to constantly be working towards what I want. The lazier and closed off I am, the less of a change I will experience.

Now to implement and move forward.

Night, Abyss.
Posted by wayneburns at 11:31 AM No comments:

Back to the Hood of Things. 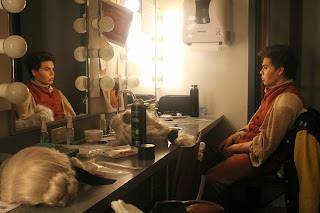 I want it to be known that I have attempted to write entries throughout these last few weeks chronicling the process of working on Our Countrys Good. Needless to say, my computer either messed up before I could save the entry, or I was tired, or I just couldn't think of anything reflective to say, etc. What I also want to be known is that this process has cracked me open in a way that I have been waiting for since second term of first year.

Perhaps it was exactly what I needed; to be MIA for this process and really just allow it to permeate my brain and body rather than trying to put it into words. We have our preview tomorrow at the Monument National and I'm really excited to finally show an audience what we have been working on. As you may have read, I was extremely excited for this process to begin and I can honestly say I am not disappointed at all.

In short, I feel like I rediscovered why I love what I do. I found the fun in performing again. The freedom that comes by truly existing as another person, and how that momentary escape is addictive.

In long, it has been quite the journey so far and I am so happy that I am coming to terms with many of the issues I have had here. These last two years have been a struggle for me personally and artistically. I was recalling how confident I felt auditioning for the school and how I knew that I had something to offer, and that no one was going to stop me from achieving my dreams. Soon after getting in and meeting my class I saw how talented everyone was and became extremely judgmental and self-abusive. This kind of attitude stopped me from doing the work I loved, I would spend all of my energy in a competitive headspace and avoid looking inward and seeing how I could improve.

This summer I had many breakthroughs, which I have spoke about in previous posts. It was a very reflective and educational period for me and it has thankfully bled into this term. I am still in a state of reflection, as I am still discovering how to use every situation to discover something about myself and allow it to feed my work. There was a moment during this process (working on Our Countrys Good) where I became frustrated with myself because I knew what Tadeusz (our Director) was trying to get out of me, but for some reason I could not pull it out. It came down to the simple fact that I was over thinking and analyzing everything he was suggesting, rather than revelling in the ideas he had put forth. I was making my performance too precious. It was like I was holding an animal, but instead of just cuddling it I was squeezing it and it became uncomfortable and attempted to escape. It was only a few weeks ago I started to loosen my grip on the character and really let him live, but also loosen the grip on my expectations. It was then that I started to discover the pleasure in being him, and it has serendipitously brought back my passion and love for theatre, live performance, and attempt at being truly entertaining.

I feel so blessed to have had this moment and I can't wait to spend all week with Robert Sideway, but I can't help but ask myself, "why did it take me so long to rediscover what I had before coming to this school?" The conclusion I have come to is simply that I needed to be blown apart before I could be built back up. I had come to acting as a kid as a form of escapism and avoidance of difficult times in my life. And now that I have sunk to the lowest point, thus far, and re-evaluated who I am as a human I can approach acting from a healthier more self aware way. I never used to care about judgement or failure before coming to school, and I deeply want to exit it the same way.

My mom once said to me, "How can you play another person if you don't know yourself?" It has taken me until this point to truly feel what this means. Of course people want to be aware of themselves and confident in who they are, but to actually get on the path that will lead you there is hard to find. The month of November was a difficult one for me to get through in many facets, but at the same time it has been the most transformative and insightful this year. The progress that I have been wishing for is finally starting to happen and I am greeting it with open arms.

I apologize for not being more explicit with my process throughout the rehearsal, but I felt that the above was something that I really needed to say.

If you are going to be around Montreal for the next week I highly recommend paying 9 bucks to see Our Countrys Good playing from the 10th-14th at the Monument National.

The premiere of Bone Deep was moved from November 16th to an unknown date. Hopefully a new date will be reassigned soon. I am really excited to share it.

If you have yet to see Blackbird you can now buy or rent it on iTunes.

Now to get some rest.

Posted by wayneburns at 1:59 AM No comments: