The Show Must Go On.

Since my last post I went to see The Great Gatsby. I thought Carey Mulligan blew it out of the park. And, well, Leo is just Leo. I also forgot how much I like Tobey MacGuire. It was an extremely solid cast and the visuals were, well, very Baz Luhrmann. All in all I enjoyed it.

I haven't had any auditions since the short film a few weeks ago, but that is perfectly fine considering I haven't had that much downtime with SOLO-icious hanging in the balance. For those of you who may not know what I am talking about, SOLO-icious is a solo festival that took place in Halifax last year and has expanded and come back this year. I have the absolute pleasure of being part of both years. This year, on Sunday May 26 @8pm to be exact, I will be performing my piece LIONESS which I wrote and star in. It is about a Lower Manhattan Latina single mom that goes in for a parent teacher interview regarding her 8 year old son.

If you have been following my posts you will know that I performed this piece at The National Theatre School earlier this year as part of an assignment. Now that I am performing it outside of the school I am extremely nervous, but I think it will be a learning experience. A fresh audience is something that is so educational especially in these early stages of development for solo work. I know I am completely supported and every artist scheduled for the evening is in the same boat as me, so we just have to go and knock it out of the park. I have my tech time today and then I am supporting the first half of the performers tonight!

After my performance on Sunday I am taking a break and just chilling out for three weeks before I head to Ottawa/Toronto for a month. I am looking forward to just relaxing and taking time to read and sit outside. I am a proactive person when it comes to projects and finding things to do, but after talking to a fellow artist yesterday I realized that I have a tendency to become lazy with my technique. In other words, I am not keeping up with the training over the summer. I tend to let it fall to the waste-side, which is not good. I really have to get into the habit of being diligent in my work in and outside of school, I find myself becoming so distracted with making projects or connecting with people over a project that I am not ready for when the project is actually here!

Everything is a process and I am still pushing my way through to find what truly benefits me and how I can keep practicing self discipline. I don't think these struggles ever stop, but I do want to get into a routine with them, because the worst thing would be to become so apathetic that it all just falls away from me. And as I have said numerous times before, I need to start getting better at the things I am not so good at.

I have met some awesome people over the last few weeks and they had some wonderful insights for me.  I feel so blessed to have knowledgeable and kind people in my life who are willing to share their struggles in attempts to make me better. It is so selfless and I am entirely grateful. I find honesty and reality to be the most important things when talking to people about their careers, no one wants to be lead down a road of lies. Tell me upfront. If you can't handle the truth then you aren't ready for the life, that's my opinion.

If you are in Halifax this weekend check out SOLO-icious!

Here is an interview with Sebastien Heins the Artistic Director of the Festival: http://thechronicleherald.ca/artslife/1131080-solo-showcase-rolls-out-tapestry

I have to get ready for my tech time, thanks for listening.

Night Abyss.
Posted by wayneburns at 11:46 AM No comments:

If you have been following my Facebook and Twitter updates you will know how busy this weekend has been regarding the premiere of Blackbird across Canada. The film opened this past Friday in 4 theatres, and will be expanding to more over the next few weeks, so if it has not come to your city yet, check out the future screenings here: Screening Info.

Today was the last event on the docket for opening weekend here in Halifax, it was a Q&A with some of the local actors from the film (including myself). It was a fairly small audience but this was most likely due to One: the Rain, which is of biblical proportions and Two: the fact that Iron Man 3 and The Great Gatsby also happened to open this same weekend. Nonetheless, the audience was extremely supportive and curious about the film and its journey. Something that has been talked about, at most of the screenings I have had the pleasure of attending, is how relevant the film is to youth and the effects of social media today. As teenagers and even as young adults we sometimes underestimate the severity of what we can put out online, via text message or even Skype! Things can become misconstrued because there is a piece of technology between us and the receiver, and these things can lead to extreme situations.

For those of you who have not heard about the film or are still on the fence about taking time out of your schedule to see it, the aforementioned is the situation that is dealt with in the film. How one teenage impulse is blown completely out of proportion and proceeds to damage a whole community. A situation that is all too relevant to what we have all seen in the media of late, with all the cases of bullying and suicide I think that there is absolutely no better time for this movie to be surfacing.

This afternoon we were discussing the fact that Iron Man 3 was sold out in both theatres, and Blackbird only had about 30 people in it. Here is a film that people are walking away from learning something about themselves and the children around them, and yet it can't pull in audiences like a movie about a bionic man, it is mildly upsetting. The fact that this film is Canadian means that it already has a bad rap before it even gets out of the gate, people don't want to see it because there is no explosions or hot celebrities in it and its not American. This is a sad but true fact. There are extremely talented people involved with this film, at least 90% being local. It is filmed in Nova Scotia and it is about Nova Scotia, and it is educational on all levels. I find it strange that more people would not want to see something like this.

There was couple that talked to me after the Q&A and they said they want to bring there son so that he can see how the path that he is on will only lead to destruction, and that there is hope for him. My question is when did entertainment become more important than education? I mean, I am all for the beauty and escapism that comes from films, hell my girlfriend and I can't wait to see The Great Gastby next weekend, but when there is something in your community, about your community, and could educate you or bring awareness to a situation you haven't been privy too -- why wouldn't you want to see something like that? Is it really that much of a hassle to make time to see that film first? It is certainly cheaper than seeing Iron Man 3 in 3D!

I am not going to try to figure out peoples motivations for what they see and don't see, I just would hope that the question is left to sit in your mind. Film can be so many things, but don't let the educational part of art be passed by for simple, mind numbing entertainment. The more we can learn and educate ourselves about one another the more we can help change the world around us, and film is such a beautiful starting place for change. Do yourself a favour and walk away from the theatre thinking, its only 12 bucks worst case scenario.

Audition update: Didn't get the part; I am too short and didn't look enough like a stoner. But they liked me and if they can get the money for a pilot they are thinking of writing something for me, which is sick!

I am going to drink some tea and and read about Prince.

I landed in Halifax on Monday morning.

Summer has officially started in my mind. I am looking forward to what the city has in store for me for the next little bit until I head off to Ottawa/Toronto/Montreal in July. I have just been relaxing with my beautiful GF over the last few days. But we both got back to our routine's today and I have started to put out my feelers for surfacing work.

Tomorrow I have an audition for a comedic short film that I am excited about, its been a while since I have auditioned for something funny. This weekend is shaping up to be chock full o' fun, mostly because Blackbird is having its theatrical release across Canada. In Halifax there are many events planned including a Q&A session with yours truly and some other local actors from the film!  The first weekend is extremely important for Canadian films, if there is a huge interest then the theatre can keep it playing for longer. Keeping it running for as long as possible is the goal. So, if you are reading this spread the word and buy your tickets here: Tickets for the theatre close to you.

I am also excited about seeing Scott Nicks and Jennah Barry live at The Company House on Saturday, they are two local and extremely talented musicians, who I unfortunately haven't seen live yet! Check them out if you are in the area.

The last few days at school were very informative, and gave me a solid goal to marinate with and bring into next year. Although the school is a wonderful foundation for my career, I still have much to learn about life and the industry when I graduate. Thus, I want to make sure I use my final year to my full advantage and make the breakthroughs that will benefit my process and artistry. For me this summer is about working, as usual, but also looking inward and listening to how I can help people and learn from those around me. Whether they are on the bus, or in the rehearsal hall, I need to focus on simply taking everything in and allowing myself to be affected.

I have a tendency to go inward and overanalyze every situation. I need to regain access to my emotions and remember what it is like to work hard on the work I struggle with and get better. Let it flow. Things are usually simpler than I make them. I also want to read quite a bit, there are so many books and plays that I want to immerse myself in, expand my mind, become knowledgeable. Daniel MacIvor said something to all the actors the other day in class, "Actors are essentially professional humans." I want to become the best person I can be, so that I can be other people. This is my personal goal for the summer.

Also get a lot of sun.

Thank you for all your continued support. 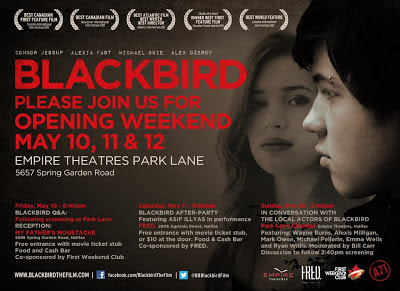 Posted by wayneburns at 8:14 PM No comments: