Get Me to the Ocean

This is my last week in Nova Scotia before I head back to Montreal in prep for school, which starts on the 4th.

I finish my final week at The Marigold Centre with a great group of kids tomorrow. They have been awesome to work with, really open to my weird suggestions and are very creative. It has been a joy to spend my last week with them.

I only hope that I have inspired them enough to come back next year and hopefully have given them some direction in their own careers. They have certainly taught me a lot.

Filming Mr. D, last week was a good time. I ended up not having any lines which was disappointing, but am on screen quite a bit (basically glorified background; you have to start somewhere). Everyone was super nice on set and treated me with the upmost respect, which was really nice. Most of the crew recognized me from last year and we really interested in how school had gone for me, which was really cool.

One of the best parts of working in Halifax is that it is almost always the same crew members working on the sets, which creates some good relationships and contacts. Although the character 'return' was not exactly what I anticipated I am still extremely grateful for the opportunity to return to the show.

Here is hoping to a third season, and perhaps an expansion on my story line!

I have high hopes!

Some recent good news is that Blackbird (the film I shot last summer) is also part of the Atlantic Film Festival in Halifax, Nova Scotia and the Cinefest Sudbury International Film Festival in Ontario.

So the film is going to be seen by quite a few people and get quite a bit of coverage.

September 16th at 7:10pm at Parklane Mall in Halifax for the AFF.

And for the Cinefest check out here: http://cinefest.com/tempfilmsandschedule/

I feel so blessed to have this film playing so many places and perhaps you can catch me at one of these festivals on the big screen!

I am going off the grid for the next 4 days, because my girlfriend and I are going on vacation before I take off for a while. You can still tweet to me @wayne_burns and continue to check out my IMDB!

Posted by wayneburns at 9:11 PM No comments:

Up and Down We Go

This week has been an interesting one.

I received some good news on Friday about finally getting rid of my old apartment in Montreal, which has been a dark cloud over my unprotected head for about 3 months. Now, all I have is the one place and I am stoked, because three apartments is far too much for a actor/student to have!

I went back to Halifax on the weekend and had a great dinner with my girlfriend and our friends, which was a much needed relaxation time. It was great to just come back and not worry about anything. The downside is that since I was in such a carefree and positive mood I spent far too much money and am kind of in a pinch this week.

I felt I owed it to myself to buy at least a shirt due to my lack of spending this summer.

Then to my disappointment I found out today that I am not receiving the paycheque amount I anticipated from All The Wrong Reasons, and there is not as many kids at my camp as there was supposed to be. So, I am in a 'financial' pickle at the current moment, but nothing that isn't still considered a first world problem.

Today I also found out that my character isn't being brought back on Mr. D with lines, I am really only being brought back as a glorified extra. This was disappointing to me as I thought that I was going to have some more interactions, like last season.

I still get paid the same, but it is honestly the coverage that makes me happy. Now, the show is very much improvised on the day and so there may be opportunity to create some dialogue, and I am all about opportunities,  but I am not holding out for anything. At this point I am just grateful to be making some extra money.

This is kind of a depressing and pathetic post, alas, this is all I have right now.

Posted by wayneburns at 7:19 PM No comments:

If you have been reading of late some really cool things have been happening to me and in this post I will continue on the cool train.

I found out last night that the film I was in last summer called Bye, Bye Blackbird (http://theaveragelifeofawouldbeactor.blogspot.ca/2011/06/and-thats-wrap.html) has changed it's name to solely Blackbird and was recently chosen as an Official Selection of the Toronto International Film Festival and is the only feature film from the Maritimes.

The two other (short) films that were chosen are: When You Sleep by Ashley Mackenzie and Crackin' Down Hard by Michael Clattenburg.

(Check them all out here: http://tiff.net/thefestival/filmprogramming)

I am going to try to make it to TIFF on the weekends when it does not interfere with school, as my school will be starting on the 4th but the festival runs until the 16th.

So, big ups to the director Jason Buxton and everyone involved.

Also, on another high point; I have been asked to be the Teenage Referee again this season on Mr. D!

They asked me on Tuesday and of course I jumped at the chance. I am unsure what I will be doing in the episode but I am excited to be asked back. I will be filming that on Thursday (16th) of next week.

I have been teaching at the Marigold Centre in my hometown of Truro, Nova Scotia all week and tomorrow the kids will being doing their performance. I feel so blessed to be able to have all these positive things happening to me and then be able to come home and give back to my community, via teaching Drama to kids and bringing awareness to the Arts.

It makes me happy to know that they walk away with smiles on their faces and also have dreams of one day being on a big stage somewhere. I am honoured that I can be part of their journey's and that they can be part of mine.

You can check out the IMDB on all the films mentioned above, and while you are there why not check out mine? And also my twitter: wayne_burns

Posted by wayneburns at 5:09 PM No comments: 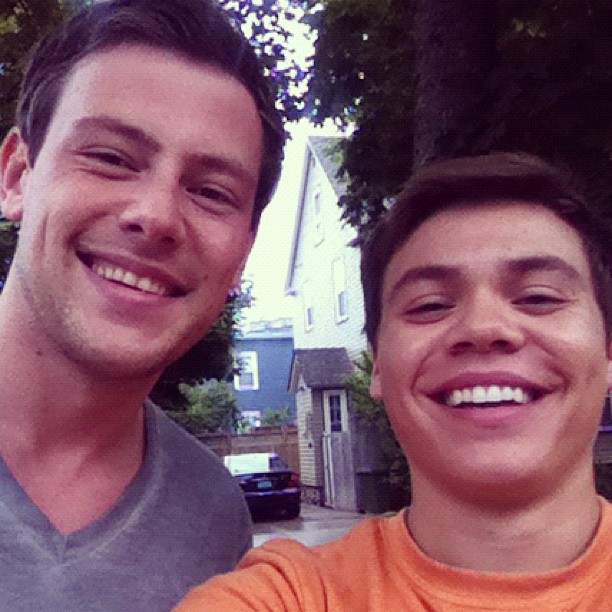 Last time I posted it was raining and coincidentally it is also raining now, providing for the perfect opportunity to write and be studious. I am going to proceed down this road now.

Yesterday morning I travelled to the set of All The Wrong Reasons, starring Cory Monteith AKA Finn Hudson from Glee,  Kevin Zegers from Gossip Girl and Air Bud and a lot of other talented people. My scene (one HUGE line) was with Cory. I was stoked to meet him and one: confirm we was actually as tall as people have said, and two: See if he was a genuine as people had said.

Well the people were right on both counts.

The set was had an awesome feel to it, everything was really chill and the cast and crew were in really great moods despise the fact that they had been doing 7 days of night shoots that took them into the wee hours of the morning. This project was the directors first feature film and she was so pumped to see her bring child coming to life. Awesomely enough the director is from New Brunswick, so kudos to fellow Maritimer Gia Milani!

While preparing for the scene Cory and I got to talking about where I go to school, the National Theatre School of Canada, and he said that he had wanted to go there when he was my age and also mentioned that his mentor graduated from there. Throughout the shoot we continued to talk and Cory ended up offering me a drive back home.

On the drive home we talked about the projection of his career and how he was envious of the fact that I am getting to study where I am, as well as his life before and after Glee and how he wants to get back to the thing he loves which is making quality films (something I have huge respect for and share in the dream of). He told me about his life in Vancouver and offered me his email to keep him updated on my life and if I ever move to Vancouver to let him know.

He told me that the reason he wanted to drive me home was because he saw something in me and wanted to talk about what I had in store for myself. I felt so honoured to ride home in a car with someone who has reached the pinnacle of fame and still longs to make quality art and, of course, has rubbed shoulders with the big guys at the Oscars.

He is truly a humble and grateful person and it inspired me to make sure to always have my morals no matter where life chooses to take me.

The movie is scheduled to come to Canadian Theatres next year and will then be making a TV debut.

Here are some notable links about the movie and those involved: